Saw this link to a letter in the Columbus Dispatch posted on a Facebook page:


Tired of toilet-paper chase? Try a bidet instead 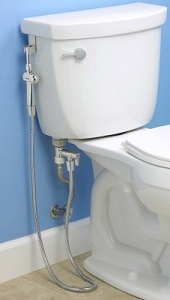 There's a similar but more accurate solution that's an everyday thing where I am.

Living in Asia one can become accostomed to using water. In Indonesia, it's standard for toilets to come equiped with sprayers attached to hoses. Most Westerners don't use them or think they're gross or weird. For me and a lot of Westerners I know here, they work great and are superior to just the use of toilet paper. It pisses me off when I go somewhere that's trying to be modern and please Westerners and has toilets without sprayers. I use TP a little at first to get any excess then spray and then a little TP to dry. Most Indonesians just use the sprayer and I can do that too if it's called for by a lack of TP. In Japan it's normal for a toilet to come not only with a built in bidet but a built in bumm spray. They have the bumm spray built-ins here but haven't seen bidets. In India they tend traditionally to just use water and maybe a little newspaper and I've heard Indians say that just using TP is gross, saying that Westerners smear themselves. If I have to leave here someday which is likely, I'll bring a few sprayers with me. They're easy to attach to toilets.

The image is from an answer from an Indonesian to the question What are the most Indonesian things ever?
-
at March 20, 2020