I love rambutan. I can eat twenty of them in a row. They're seasonal and it's rambutan season. Tend to tear them open with my teeth and eat the lichee-like insides except for the seed. We've received two batches of them in the last few days as gifts from a houseeper and a driver. I think we're not eating them fast enough and are going to end up having to compost a bunch. I'll go out when I get hungry and see how many I can eat. Rambut means hair as in human hair. Our dog's fur is called bulu. Search for "rambutan" images to see what they look like.

People ask me what's it like living in Bali. Here's one answer.

I got tired of our plumber saying there's nothing we can do about having a pump that starts up if one drop of water drips somewhere. I asked some others too. They'd say that there aren't any pumps we could get that have high and low settings like the one we installed at John's place (low for when it starts and high for when it shuts off). We had a leaky toilet our plumber Mudik and his boys gave up trying to fix it. It was so small no one could see or hear any problem but shutting it off stopped the pump from starting and stopping constantly. Our plumber said we'd have to have the tank above the pump to do that. My occasional assistant, Gus, brought a plumber named Komang over from where he lives. He takes care of the snazzy guest villa where Gus works. He couldn't find the cause of the leak in the toilet either. He didn't know about the high and low settings but said he could install a much better automatis he called it, the electronic thing that starts the pump. He did and it worked. Just went off every five or ten minutes. I read the box (in Indonesian) and showed it to him. He'd never read it. It specifically said it would stop pumps from stopping and starting constantly, that it wouldn't restart till one liter of water had leaked from the system. It's a York from England. It was a miracle. It made life better. Now if there's a little leak I don't have to deal with it immediately if I don't want to be bugged by the pump. Komang went back to the mystery leak in the toilet. He found the leak by putting a little video camera in the toilet that filmed from angels he couldn't get to. So it was fixed too. And then I discovered he is a master at adjusting ceiling fans. We have nine ceiling fans and sometimes one will get a little off balance and needs to be adjusted. Our plumber is also our electrician and he and his staff have done a pretty good job adjusting fans but Komang did a perfect job. He spent two hours on one fan reinstalling a wooden mount that kept it level though the ceiling was at a slant. In defense of Mudik, he's fine for standard work and that's mainly what we need. He lives nearby and he'll come right over for something that needs immediate attention even late at night and that happens. But he's not good at out of the box thinking. Komang is. 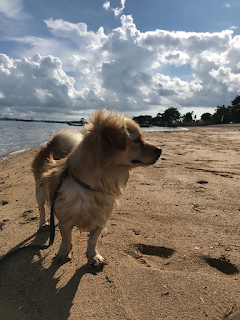 Our dog Bandi, short for Bandita, will return from the Anom Vet Clinic today via their pet ambulance. Dr. Anom reported this morning that she didn't vomit any and was eating this morning. They're keeping her till this afternoon under observation but so far it looks like she's okay. Last night we rode in the pet ambulance to the clinic. Bandi had been sick for a couple of days and couldn't keep food down. After a couple of visits to our place to treat Bandi, our vet advised the clinic. A woman out front was making offerings. She was dressed for it too, like she would to go to a temple. Then she went inside and through a plate glass window we could see her put on surgical gloves and join two others who were working with a small dog on a treatment table. After Katrinka showed Bandi's vaccination card and filed out a form, Dr. Anom came out and invited us into another room where she went on another treatment table. She didn't object. She was getting nice attention from a young fellow who kept her in place while the doctor checked her with a stethoscope and then her temperature with a rectal thermometer which doubled as a stool sample collector. He said she's a little hot, went out of the room and came back in a few minutes with a stool sample report. There was some blood. He took her to the X-ray room, came back with her, and brought up her X-rays on a wide screen. Couldn't see any blockage. Told us stuff I forget. That's true after everything he did. I just remember the highlights. He took blood and five minutes later explained the results. Said he had more blood that, with our permission, he'd use to check her liver. His report on that was that she'd eaten some poison. He advised putting her on an IV for the night and seeing how she is the next day. We were driven home in a pet ambulance. So she's coming back in a couple of hours and apparently is recovering quickly. A lot of dogs here die from poison, accidental and from poison that's thrown out on the streets and beach. A couple down the street lost their pet Beagle when it ate something on the sidewalk walking near here. We know a few people who lost a dog to poisoning. Our vet says she's lost four of her own over the years. It's not clear who does this or why. You really have to watch your dog here when out.
at January 10, 2023 No comments:

It's Galungan, at least in a lot of Bali. I hear that some places do it at other times. It comes every 21O days. Our penjur is up. Here's an old Cuke nonZense post about it - with a photo of a penjur. Wayan, our landlords son and a neighbor, made it. He makes em good. On Galungan workers receive bonuses. We gave to two housekeepers, two drivers, and our gardener. They're all most deserving.

Nine years ago today, we arrived in Bali - with only Carry-on, no checked bags.

Reverse nature's decline or there is no future - UN