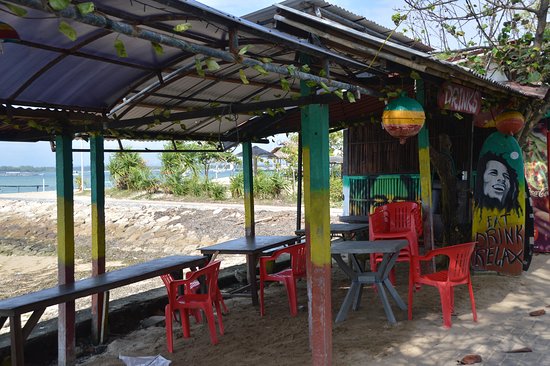 Katrinka came back from yoga saying I should go see what's happening at the beach - they're tearing down all the shacks, thirty cops to make sure there's no interference. Took dogette Bandita and a 100k rupiah bill to pay debt to fruit lady intending to give it to her on the way and get the change on way back. Walked through the wide open space that's been not impassibly jungled up because obviously they're going to build another luxury hotel there even though there are too many already. It's been wonderful having it to walk through on the way to the beach for the last half year or so - rare South Bali open space! As soon as I entered I could see all the way to the water where there had been a row of shacks, functional shacks - stores, a a cheap little restaurant that did pretty good business with locals and bule (whites) (see image), a sculptor's studio, surfer hang out spot. Climbed over the least threatening looking rubble to the brick walkway that runs along the beach. Watched the backhoe hoe back stuff. I hadn't understood why people were taking down parts of their own places yesterday - saving materials.
Walked over to in front of organic Genious Cafe and Mercure hotel down to the water, along the edge a way, Bandi jumping after darting tiny sand crabs. took off tee shirt and sandals. Darn it - still had that hundred. Took it out of pocket, folded, put in tee shirt and told myself not to forget it the way I had those Raybans that had been a gift because I'd never spend that much. It's a high low tide so I can still swim. Bandi wades along beside me, runs around with a dog that comes by, visits with a sunbathing woman. Walking back, Made, a waiter at Genius, says they took his home - he meant that neat cafe next door, No one is pleased. Going over the rubble on the way back was harder. The best spot was gone, the backhoe now digging around a tree, a pretty big tree - maybe forty feet high. Bandi keeps slipping. Can't seem to get over some corrugated roofing material. I didn't understand what the problem was till a worker comes up and releases her leash that was caught. We get a ways out and watch the backhoe push the tree over. It falls short of a couple of motorcycles. Halfway through the field I realize I'd forgotten the 100k bill. Checked my swim suit pockets to see if I'd just forgotten I'd remembered but no - I'd forgotten. Not many people on the beach. Give it a shot. Back to the rubble. No good way over it. A peeing worker on this side shows me the best route. Bandi jumps from this to that as I test each step, remembering a lumberpile that had driven a nail into my five year old foot. Two little girls near where I'd put the tee shirt and sandals. What if they've got the bill? I envision various scenarios. But there it is! Back over the rubble again - could go through the lovely gardenesque Mercure but every opportunity to be in that field is precious. Zillions of baby papaya popping up all over. I pick a leaf from near the top, having heard those are the best. A guy gathering some other type of leaf comes over and shows me to get the light green baby leaves. I knew that but didn't want to take them from the little tree but he said don't worry, tree will be fine - these are the best, healthful and bitter. Bali Bill swears it cures everything. I drink it now and then. I just blend it, don't even boil it. Don't forget the fruit stand on the way back. Owe her 45 Kat said. Get another 55 of mango, mangosteen. pear - not like US pears, more like Japanese, can eat hard. Now owe her 10 for next time walk by. Run into Mimi and another Kat walking their dogs. We talk about the demolished shacks and the crying woman and how they have to keep building no matter what. The other Kat's mother lived here for decades ago. She and I were both in Ubud in 92. I tell her Bali was called "the overbuilt island" back then. "They haven't stopped," she said.
at January 02, 2019