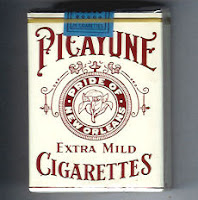 Back in late 1964 or early 1965, Julie was visiting Fort Worth from New Orleans. I'd lived in her family's house there for a few months and we'd gotten close. I was 19 and she was still in high school. I had a crush on her and she was most sweet with me though we weren't lovers at all. She was delicate and played beautiful piano. She also had a wild spirit - and she smoked non filter Picayunes from Louisiana, surely the strongest cigarette made in America - with "Extra Mind" written on the front of the pack in large letters.

So I had this crush on her but we weren't even kissing so there was an internal tension building in me. My friend Jeff came over from Dallas. Jeff was into the Beat poets and existentialists and poetic suffering. He'd turned me on to speed and wine but there was none of that with Julie. She and he got along right from the start. We went to a movie at the Bowie, a popular arty Ingmar Bergman film called Through a Glass Darkly (8.1 on IMDB). My buddy Ward drove. He had a date too. After the film, Jeff, Julie, and I were together in the back seat of  Ward's car and Julie was paying attention only to Jeff. I was in anguish. Ward was talking to his date. I was alone with my agony. Suddenly I realized that the cause of my mental pain was the attachment to Julie. Instantly it dropped away and I felt calm, satisfied, happy. Didn't make a sound. She turned around, looked at me and said, "What's the matter? Don't you love me anymore?"