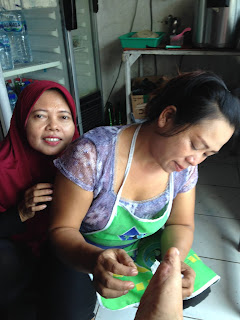 Walked to Bali Mandara hospital to see the ear, nose, and throat doctor. She said the perforation in my ear had closed up so I can swim again. Halleluiah. So that was a month ago. I'd only swum twice in ten weeks, both failed attempts to keep the ear dry and after the second time, it got infected again. But abstention and discipline had paid off. Happily I left the hospital to walk home and had four accients on the way, the first when I ran across the busy divided bypass and smashed my foot into a sharp place on a curb. That resulted in a good deal of blood, tissues from the nice rattan store guy, and a hosing off outside an eatery.


The second accident was removing my cap sending sunglasses resting on it hurling to the floor sending a lens flying. That was fixed by a nice waiter. They didn't have milk without sugar for tea so I went next door to get some. Woman at that store showed concern that I was bleeding. I looked down at my foot. Not the foot – the arm! Oh my gosh. There was a long slash along my arm. Must have done that when my foot crashed into the curb – but I didn’t fall down. Oh well. I’m always finding bruises and little wounds I don’t know where they came from. This was such a clean cut though and dripping red. The nice lady cleaned the arm and foot and put on red betadine while her friend watched. On the way back to the cafe brushed by a plant – couldn’t miss doing that unless stepped off the sidewalk. Then I noticed a fresh bloody slash on my right arm. Oh – that’s where that first slash came from. Went back to the plant. Long thorns. And with a formal Muslim head piece is a nice man who is just getting off his motorbike here. He must live here. I showed him my two slashes and his plant with the sharp thorns. He trimmed it back right away. Same woman tended to that arm too.

Back home I proudly showed Katrinka and housecleaner Kadek my wounds. Katrinka said I shouldn’t be allowed out. The red arm slashes were impressive but it was the toe that concerned them. There was a canyon where it met with the sole. Had to go to a nearby clinic. Three stitches. Change the bandage every day. Can’t get it wet for a week. Once again no swimming.
at January 28, 2020