At the cremation of dear friend Peter 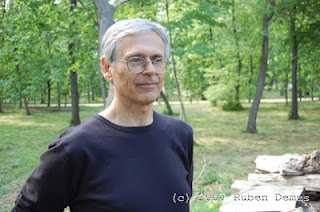 Spent yesterday with Peter Zipser's cremation in Singaraja. There were about fifty people, more locals than foreigners which were mainly Germanic (He was Austrian, she'd Swiss, they are students of Richard Baker and have spent a good deal of time at his Johanneshof retreat in the Black Forest.

Got to the crematorium early and sat our front listening to the gamelan and watching through the open entrance a ceremony going on. People coming and going in colorful, traditional attire. Behind me the ocean and beach littered with the remains of offerings and some discarded food and drink containers.

After hours of waiting and meeting friends of Peter and Eveline's, we all went into the back room for our ceremony while another one continued in front. There was no separation between the two rooms so it was rather cacaphonious. First we listened to a brief talk in Indonesian with a Buddhist slant by what seemed to be a Hindu priest dressed in all white including his toppiece as they wear. I don't think it was anything that Eveline planned. Balinees see Buddhism and Hinduism as basically the same. Peter's body was in a white cardboard box on a gurney. Before that casket was decorated, the word Austrian could be seen on the end of the box written in black marker. A large fan on the upper wall, kept us cool. Japanese shakuhachi music played as Eveline took a microphone a spoke some words translated by a friend. I could barely hear her over the sound of the furnace that was going, the fan, the clanging gamelon from the next room,  and sporadic competing miced talk from there. Not that I minded. Her spirit and care came through and Indonesians are used to dealing with congestion in a harmonious and polite manner. A line of eight or so people carefully walked through our ceremony to make offerings at the door to a furnace that was already going. She and I wore rakusus signifying our Buddhist ordinations. She offered insense at the little altar before the box with a photo of Peter and her. She handed me one which I offered, took the mic, paused some waiting to be able to speak, and said, "Peter, you drank green matcha tea every morning. Now I offer matcha to you." I wanted to say "from your favorite bowl" but I thought I wouldn't have been able to get it out. I placed the cup on a larger altar Evelin had lovlingly prepared with various items including a bowl of cherry tomatoes Peter had planted in their beautiful garden - harvested that morning. She spoke some more. Chanted a little. Bowed to the floor three times before his photo and the cardboard casket was wheeled over to a furnace door. She went inside with it and a couple of employees, the fire roared up, she came out, and soon we hugged and said goodbye.

Peter and Evelyn were riding their motor bikes when the person in front of her had a spill. She stopped and went to help then turned around to see Peter in the road. She ran to him, he looked at her and died. A truck that didn't stop quickly enough had run into him from behind.

An online news report based on an eye witness and police report had a number of errors which have been corrected - that he was an Australian tourist and wasn't wearing a helmet. They always wear/wore helmets and he's Austrian. They have KTAP resident visas - that's a step up from the KITAS resident visas Katrinka and I have. They've been here about nine years. Other details differed but they were not important.

On the way to Singaraja driver Komang and had I talked about a large traffic sign on the winding mountain road. It had the words "jaga jarak" which means guard the gap - in other words, don't follow too close. I said that my understanding from driver safety classes was that that was the number one most important factor in reducing accidents.

Peter Ford sent an email today with: When I was in the Peace Corps in Thailand, we were forbidden to ride on motor bikes with the threat of expulsion from the program.
at July 15, 2019