Q and A bout our wedding priest 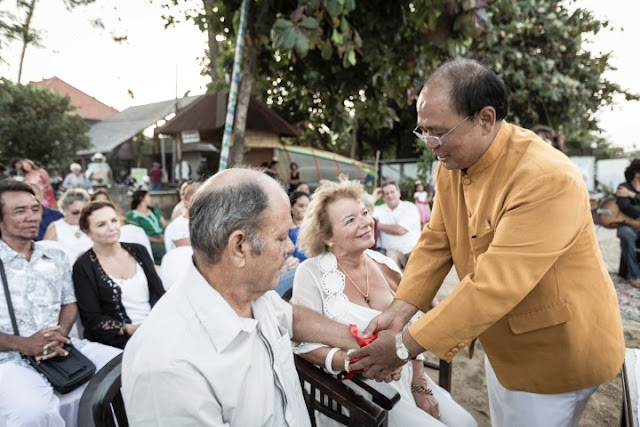 You write that the wedding was performed "by a Buddhist priest in the Theravada tradition." This is the first I've heard of a Theravada priesthood; so far as I knew, the Theravada community consists of monastics (bhikkhu, bhikkhuni – though there've been none of the latter for some centuries – and several junior versions of same – samanera, mae chi, etc.) and laypeople, but no priests as in Zen and other Mahayana schools.
This guy doesn't look like a bhikkhu – layman's hair and clothing, though the coat is the traditional saffron color. Is this a special Indonesian/Balian version of Theravada?

Yes - he has a family and was a businessman. I think I commented somewhere in one of these Wedding label posts about him being a priest. It seems to be just something here in Bali. This isn't like Thailand - loose in a different way. We call the Theravada monks, Bhante and he's a pendeta which covers from ministers to Hindu priests. The Hindu priests get married etc. I've seen Muslims here put out offerings which is to spirits which sure isn't a Muslim thing to do. Hinduism here is voodoo. Culture is strong. It's all beyond me. I don't try to understand it. In a prior post 've got a link to his temple which is only six years old or so - on the site of a Hindu temple I think. He told me that the banjar, neighborhood governing body, supports his temple but clearly so do some wealthy Indonesians (I surmise). The one where I did the retreat has had a lot of money both for buildings and supporting vipassana retreats. I met a man representing the foundation that supports it and he was from Java - they are of Chinese descent but the teachers are from Burma and Thailand. I was pleased to find this here, am not a fan of most Chinese Buddhist temples in terms of anything other than sightseeing.
at August 15, 2015