Ran into a film of the first Earth Day made by Michael Katz and Chris Bamford (guessing about the latter) and wanted to see what Alan Watts had to say but it's one of those randomly censored videos. Found it on YouTube now and can see that one so no big deal. As I mentioned a few days ago, that random censorship just seems so characteristic of how this place, Indonesia, gets administered. 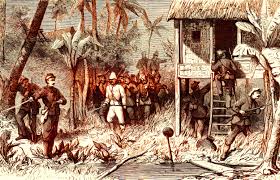 I recalled reading how long ago people in Russia invited Vikings in to run the place because they were doing such a bad job and that's where the Czars came from. Of course there's surely more to it than that but it's what I was thinking and then I recalled how someone in India told me that Kerala had a lot of good roads they brought in Germans to make - and boy did all of India need help in that area and, come to think of it, many other areas. So I think that Indonesia should invite Germany to come administrate them. Or why not let Germany just run the whole world. Wait - they tried that and ended up just trying to kill everyone and destroying everything - or lots anyway. I'd suggest America but we end up killing and destroying too. So, the Dutch who are sort of like Germans and probably just as good at that sort of thing. Oh darn - I forgot - the Dutch did administer this place for a while and they were not always nice. Killed and were mean to a lot of Indonesian people and here in Bali including the whole royal family of Sanur who stood up to them. Some Dutch guys killed some natives in New Guinea whose tribe later killed Michael Rockefeller in revenge. That reminds me, the king of Denpasar just got out of jail for killing his step-brother. Had to serve a whole year and make apologies and promise not to do it again. I think I'll just leave them alone and let them take care of themselves though they kill people and foul their nest too but at least it's their biz. Think I'll just be glad they let us stay here.
at May 19, 2015