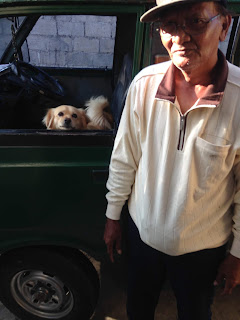 That's Nyoman, our trusty bemo driver with Bandi in photo.
Bandi just went off to the Bali Kennel for her regular Saturday play time with other dogs. There's a an area for big dogs and one for small dogs and she goes to both, loves to wrestle with the bigs, some of whom are quite fond of her. They show us video clips sometimes. Super nice place owned by a Swiss guy. Five bucks for day care or overnight and ten if salon treatment is included which Katrinka now wants Bandi to have every Saturday rather than every other to keep her critter free and not transferring her aroma to bed etc. They called yesterday. Had cleaned up a small wound on an ear. She'd been attacked by two street dogs when I was walking her back from the tennis court. That's never happened before. My racket put a quick end to that. She loves it there but is like a kid who doesn't want to go to camp when Nyoman comes to pick her up. Alan who owns it and Yoni who helps run it are in love with her, say she's fearless and good with other dogs and people, loves to play but never gets too rough. If she did they'd ban her.


Bandi joins me at tennis and knows to stay off the court. We don't have to tie her leash to something anymore at a restaurant on the beach. We don't hold the leash when we're walking her on the beach or in a field. Have to if there are chickens, ducks, or cats around. She sees cats as playmates to chase but has never gotten close enough to any except our own Kuci - pronounced kuchi after kucing which is cat in Indonesian. Katrinka calls her Kucing but I say you can't call a cat, cat. It's not right. This is a major dispute between her and me. Actually Katrainka's also cat ,spelled Kat, because it's easy for locals to say and remember.

Bandi (full name Bandita) and Kuci (full name Kucita) entertain each other a good deal here. They'll take turns chasing each other. Kuci often rolls over on her back with Bandi dancing around her nipping at her and she clawing at Bandi. Meal time they dance around each other in mock skirmish. Kuci's is brought first to a high shelf in the bedroom. They run in there still at each other, Kuci hops up on the shelf and Bandi on the bed beside herself with excitement. She runs back to the kitchen grabbing a little rubber ball on the way and shaking it around a sec, then lapping some water, then staring up tongue wagging as her dish is prepared. 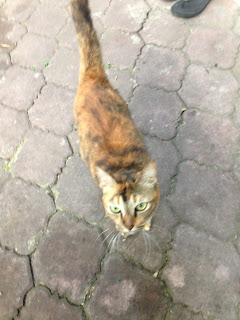