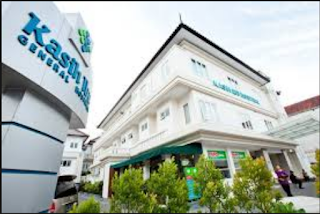 Katrinka came home yesterday afternoon after four days in a Denpasar hospital for Dengue. Doctor came at 2pm yesterday and said her blood platelet count was going up fast and she should consider herself recovered and can go home. I was surprised. A doctor buddy I've done Vipassana retreats with said she shouldn't leave till the platelet count was back up to the low end of the norm, 150. Katrinka arrived there with a count of 20 and it had gotten as low as nine which is scary because platelets are what clots.
That low you can just start oozing blood internally with the worst being in the brain. But then it went up to 10 on day 2, 18 on day 3, 62 early day 4 and so we thought she'd have to stay at least another day but the doc said it's even higher now, going up quick, you can go home. And finally once home she could walk and brush her teeth again. Those four days they wouldn't let her do anything. Even wanted to help her go to the bathroom but she did that without asking for help. I was there morning till night with her so I'd help her with the drip bag when she gave herself a washrag bath - had to pull it through the hospital robe sleeve and hang it on a hook in the bathroom for that. Nice robes they supply, not like those horrible hospital gowns with no back in the states. She had to be on the drip because dengue dehydrates.

Last Saturday she woke up not feeling well, started getting warm. Was 102.2 on Sunday. Monday that went down. Tuesday called Dr. Wayan who zipped over on his motorbike with assistant who was Muslim and doesn't want to be near dogs so put Bandi in her carrier. She doesn't mind. (Some Muslims play with her, hold her). Katrinka had low blood pressure, not normal. Low temperature - down to 95. They took a blood. An hour later he called and said get ready to go to hospital. He zipped back and explained she'd got the signs of dengue. Sent us to Kasih Ibu (Mother's Love) Hospital which I later read online is the one here that specializes in Dengue. It's upscale. Nice place. Got a private room with table, chair, couch, fridge, closet next to the nurses station. Anything we wanted was provided right away. I'd go through two or three pots of tea. Eat half of Katrinka's food.

Katrinka was very low energy the first day but by the second her temperature and blood pressure were back to normal and only the platelet count was bad. First afternoon we watched a movie on the big screen TV and some CNN which was novel - we turn on the TV at home about once a month. She slept. By the second day she was reading on her Kindle or watching Netflix on her laptop and I was working away at my computer and responding to anything she needed - and occasionally going down and up the stairs - we were on the fourth floor. Poor prone Katrinka is a yoga and walking fiend.

To supplement the so so food there,  I brought papaya leaf juice made at home, kale-spinach-cucumber-ginger juice from a juice bar on the way, fresh guava juice from the restaurant in the hospital - all three recommended to fight dengue or thicken blood, especially the guava.

There are four strains of dengue. I know lots of people who've not gotten dengue here and lots who have - some as many as four times. From what I've heard, I'd say Katrinka had it pretty easy. Don't tell her that though.

When we arrived I filled out the info sheet while doctors and nurses were checking her out. We get local price with our residence visas so a three day stay with what she had would be about 1200 bucks. We have a $2500 deductible on our insurance so forget it. That's super high for Bali. I wouldn't have wanted to go to that hospital. You can get cheaper. But ok. Put a down payment in. When I went to pay the final bill I was shocked. I'd worried the doctor would keep her three longer than needed to get more money for him and the hospital and that hadn't happened, but then I worried about a bunch of extra charges. Nope - it was even less than what they said it would be and no extra charge for the fourth day.

I expected to see a lot of foreigners at Kasih Ibu but almost everyone who I saw there was a local or at least looked like locals. Katrinka commented on how quiet it was and how the lighting was more subdued than US hospitals. And such nice people taking care of her - and me too - and how well and pleasant and responsive. No one ever seemed in a hurry.