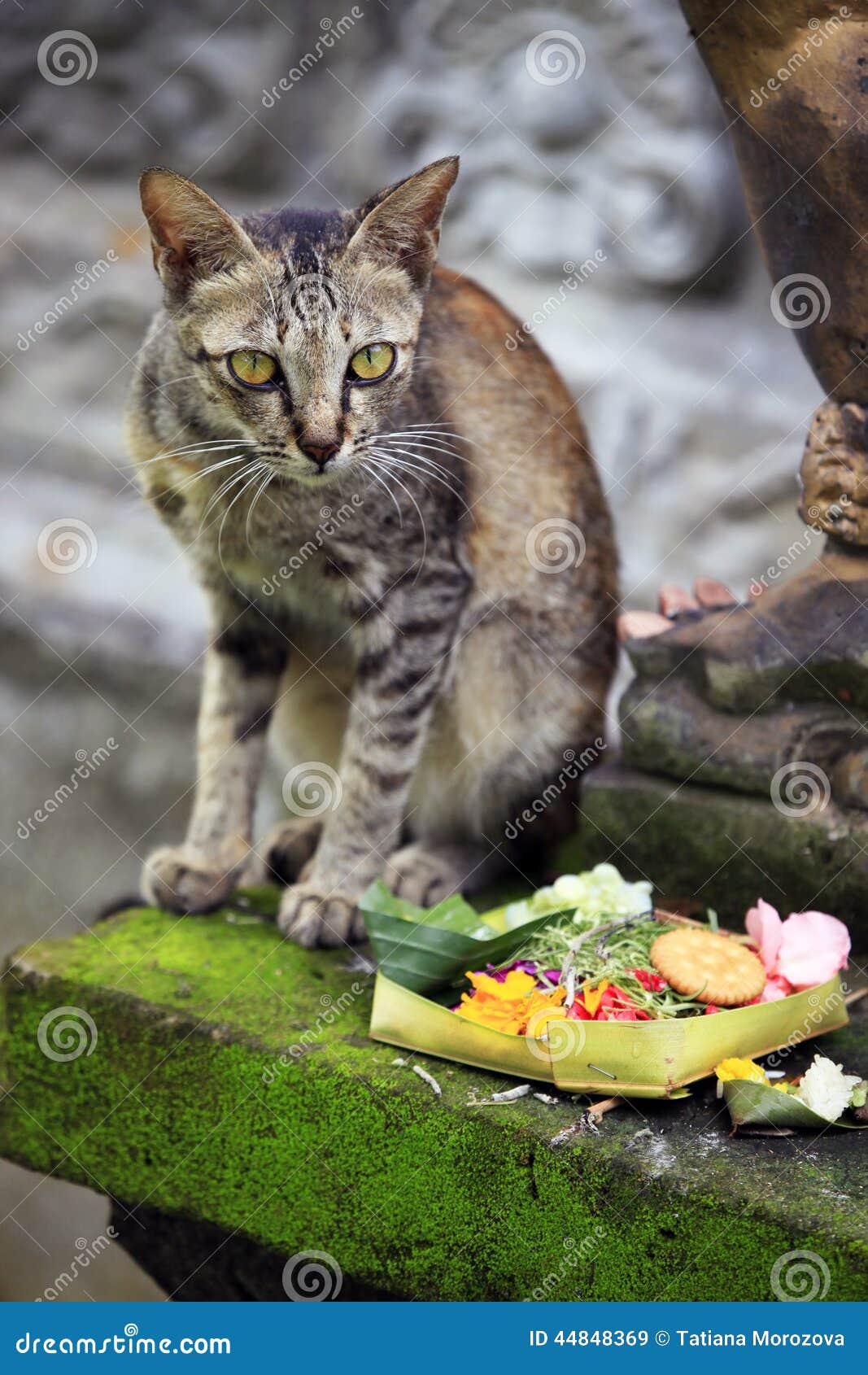 There's a stray cat looking just like that photo of a Bali cat who's been hanging around here for a couple of years and who keeps getting pregnant. We don't see much of her litters. Stray dogs and cats regularly rotate in and out of these whereabouts as their generous contribution to the life and death cycle. But this grey cat has survived. Katrinka calls her Kucing (pronounced kuching) which means cat in Indonesian. For her Katrinka will break our rule not to feed strays. Kucing obviously has other humans she relates to because she just comes around now and then with long absences. She's pregnant again so she's been hungrier and coming around more and Katrinka has been most supportive. Kucing isn't wild about what she gets here because we don't have much animal food scraps at all. Mainly she'll get some bread or rice soaked in milk.


A Swiss woman staying next door for a month bought some cat food and offered it to me but I said we don't want to get her hopes up and anyway I'm against killing animals to feed pets. She understood.

So Kucing has been showing up early and sitting on the mat in front of our screen door and Katrinka's been holding her some and she eats a little and moves on. A few  days ago she nipped at Katrinka's ankle, a sign of affection but Katrinka was not pleased. This morning Kucing nipped a little too hard and Katrinka's ankle was bleeding. Poor Kucing. I'm sure she won't understand it but she's out now, not only won't get fed, she'll get shoo'd away.

I tell people who come here to visit not to touch the dogs or cats because locals here don't do that and they're not used to it and can react defensively. In this case that wasn't the problem but the result is the same. You must get immediate radies shots. So I called Dr. Wayang who really isn't a doctor but he teaches at the medical college and is always helpful and he rode over on his motor scooter, talked to Katrinka, and a couple of hours later she met him in his little storefront office and got four shots and some antibiotics. One or more shots in a week and again in a month.

There was no rabies in Bali till 2008 and they blew it bad doing everything wrong. There have been a few hundred deaths since then - from people who thought it highly unlikely they were in any danger. A nearby landlord's dog bit a guest. He said there's no rabies around here, wouldn't help or pay for her shots. She flew back to Australia. Probably true there's no rabies around where we live but every place in Bali is on red alert with the most fertile conditions said by the local health people to be lving by fields with stray animals which is a good description of where we live.

We doubt that Kucing has rabies but one can't take a chance with it. It's the most lethal virus and it's too late to get shots once symptoms set in which can appear in seven days or seven years. Nobody survives - and it is a highly unpleasant way to go. Well, okay, one person, a woman, in the known radies history of the world has survived as the result of an experiment to put her in a coma and she had a long, difficult recovery. One would be more likely to win one of those giant lotteries twice in a row than to recover from rabies. If you ever have a choice between rabies and Ebola, choose the later. Meanwhile if in Bali don't mingle with the strays and if you get bit or scratched by one and the skin is broken - get the shots.
at December 22, 2016