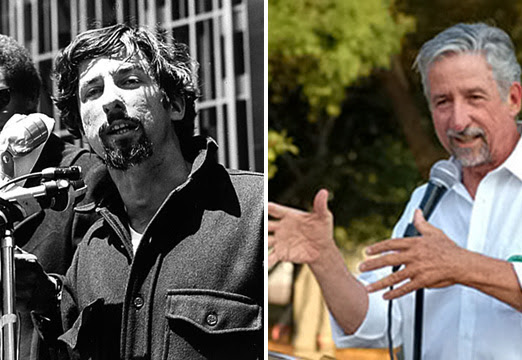 As in Mississippi and in Ohio, some interesting characters came through there - policy wonks and hippy precursors, pacifists and anarchists, students and dropouts, the stern who'd make me tiptoe and the friendly who'd relate more charitably. Tom Hayden was working in an office. He was a founder of the whole national group, serious, dedicated, no time for screwing around.
He articulated the cause, was on the phone a lot, came up with money that bought the paper and ink, paid the rent and fed us. He said hello to me while on his way to the airport to fly East for meetings.

Robert Gnaizda got me together with Tom Hayden one evening. Hayden was running for senator. He said he'd like to come to the Zen Center to talk. I told him not to bother, that everyone there would vote for him anyway and that it wasn't a political place and no money or volunteers would likely come of it. Later Bob said he thought Hayden was rude to me but I hadn't noticed.
at October 25, 2016