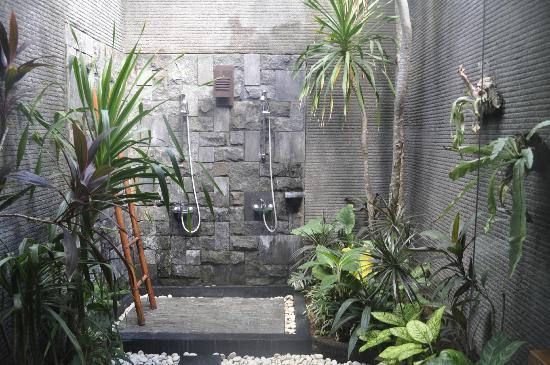 We rarely see a bathtub. There are some nice showers here, however. The one in the photo is a couples' shower off Trip Advisor, not ours. I took a hot bath in a large tub in Germany almost every night. Not many bathtubs in lots of Asia. Japan of course has the best tubs where one sits rather than lie. I wonder about Korea. Can't remember. Not in India even in some nice homes I was in but it's a big complex place and I just experienced a millionth of it.
We see tubs in places we stay here on the island sometimes and often they're big square tiled things that look snazzy but too big take forever to fill up to a foot or there's no hot water for them. The people putting them in and designing don't understand. When we were in Japan a year and a half ago we had a hot soak every night. I say soak of course because you clean off outside first. I did that in Germany too - cleaned in the tub first then filled it or took a shower in it afterwards. No water shortage at all in those parts. But there are water options here to offset the paucity of tubs. - thanks for the query MK who said he hoped I didn't shock myself in the tub but then again, do we have tubs? This was the answer.
at September 21, 2016