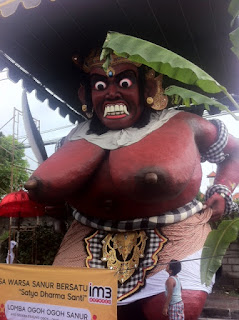 Tonight March 8th the demons come out and are cremated. Ogoh Ogoh is a great show. Not just demons but mythological and other creatures. A lot of creative statues of wood and paper built by neighborhoods and anyone who wants will be paraded nearby. There will be so many people out at the by-pass intersection that we'll probably stay on the side to avoid the crush. Katrinka took the photo of an enormous Ogoh Ogoh from our neighborhood.

After the Ogoh Ogoh parade (coming from more than one direction) things get quiet and we move into Nyepi.

All day Wednesday, March 9th and all night till dawn the next day is Nyepi, day of silence, quiet, meditation and prayer in which everything is closed including the airport and people are to stay inside and not use lights or electricity if possible. Nothing on the roads but emergency and police. Some people go to hotels that they can do what they want to inside. Some leave town. We love it. Hunker down - and discretely cheat - like to tiptoe out to see the partial solar eclipse in the morning.
at March 08, 2016