A Story with a Dragon 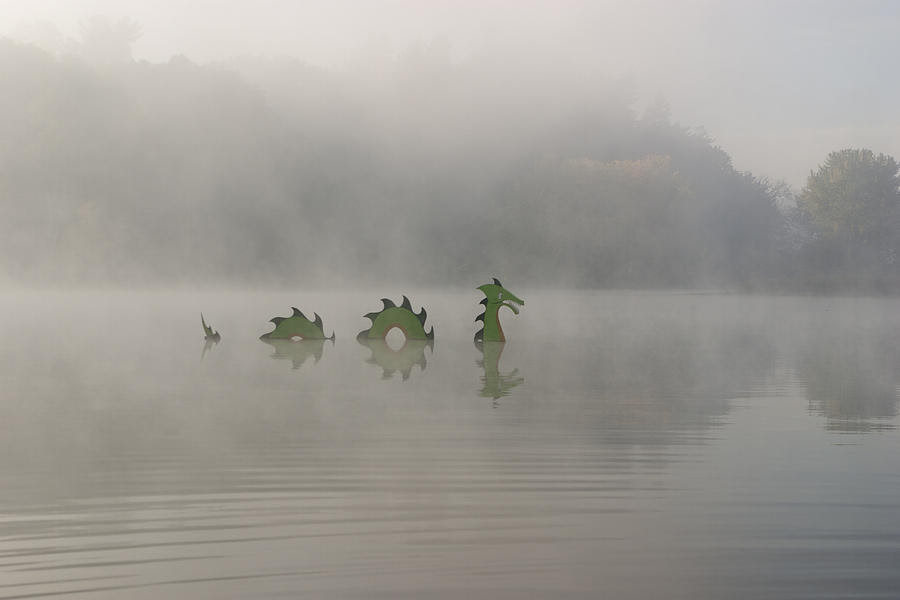 One and Another Incarcerated
Two are in a prison cell, One and Another. The walls have lines of dust running along the mortared spaces between black stones. The floor and ceiling are aged cement with cracks and algae. The door is rusted steel with a small yellowed, distorted glass window up top and a rusted steel plate on the bottom which slides open with a piercing scraping sound announcing mealtime.

There’s a bare light in a wire cage in the center of the ceiling that goes out at nine at night and comes on mornings at six. A toilet hole on the floor in one corner with a pipe in the wall next to it that slowly drips into a ceramic bowl that shows the stains of long use. There are wooden platforms for sleeping on the side walls and a bench against the back wall.
Using his height and foot size as yardsticks, One has measured the length, width and height of the surfaces and objects in the room. Above that bench there is what One figures is a 28.5 centimeters high, 92 centimeter wide 58 centimeter thick opening with three iron bars 2.5 centimeters in diameter. He has estimated the age of the cell by the amount of rust on the iron, and periodically announces numbers for the humidity and temperature. Another stands on the bench and looks at the river flowing below and across to the river’s far bank, freedom in the land beyond. She can stick her head between bars and barely see a straight drop into the river.
A dragon lives in the river. Noting its bicuspids, One says it is waiting there to devour anyone who tries to swim to freedom if someone could swim that far if they could swim if they could get out. One estimated the dragon’s length and width, how much it weighs, its species, family, class, the size, thickness, and number of its scales, claws and teeth, the amount of water it displaces. He can’t discern whether it’s male or female. Another looks into its black eyes and sings to it. She does so first thing in the morning and last at night. One wakes and goes to sleep by her song. The dragon listens and looks toward the window.
Three times a day comes the metal scraping sound and mush is delivered on steel plates with steel spoons. One eats right away sitting on his platform. Another stands on the bench and looks out the opening, taking an occasional bite. When there’s a knock on the metal door, the plates and spoons must be returned. Another waits until the guard shouts to return it now! After the guard is gone, Another throws a ball she’s rolled with most of the mush into the waiting mouth of the dragon. She’s thin. One is plump. The dragon is just right.
Days pass. One counts them and announces how long they’ve been there, the number of days, weeks, months, seasons, years, hours, minutes, seconds. One has told Another the number of stones in the wall, their average sizes and estimated weight and individual size and weight. He knows what type of stone it is and substances it’s composed of. He can announce the time by looking at shadows below. Another always expresses appreciation for One’s facts and figures. Then she gazes at the dragon.
One day after dinner, Another did not throw a mush ball to the dragon. She just kept gazing into its eyes. When it came time to sing she did so. With One asleep and the dragon looking up, Another quickly went to One, kissed his sleeping head, returned to the window, lifted out an iron bar she’d been digging away at for countless days with the spoons during mealtime. To the dragon she tossed the last mush ball containing the day’s powdered concrete which gave the morsel a distinctive taste the dragon had grown to love. Thinly Another slipped through the opening, clung to the remaining bars with her hands behind her and with her heels against the walls pushed and leaped into the water with a splash by the dragon which bowed down so she could slide over the back of its neck and straddle it. The dragon swiftly swam to the other shore and gently lowered it’s head so Another could step down to freedom, bow to the dragon, and walk home.
One awoke the next morning to find himself without Another. He looked at the bar lying on the bench and the opening too small for him – and anyway there’s that dragon and all that water. He wondered if she was in the water or the dragon or, looking across, no – that’s impossible. He decided after eating to calculate the number of gallons that passed by each day. He started sharing his observations with the guard and in time there would be unexpected practical applications and improvements to the prison.
photo - River Dragon in Fog by Gregory Scott - lifted off web
at November 28, 2015