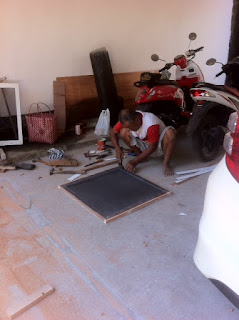 That means carpenter, skilled worker - wood. Two of them have been at it here - third day today. They're installing screens and windows and a screen door. They built them all from camphor which they call grade two wood, grade one being teak. Built them from scratch sitting on the cement carport. Very little use of power tools.

Tried to get the landlords to do it but they wouldn't even let us until our neighbor Philip did on his house and they relented. Philip's Balinese wife wouldn't let anything be open because she feared for their baby - mosquitoes. We want screens to keep mosquitoes out too and also to increase air flow.

That's Kadino in the photo, their motorbikes to his right. Philip's car. Our wall.

We've had to run fans a lot because, except for a high screened opening in the bathroom, the back windows are just permanent glass. They're replacing the glass with screens and installing windows that open to the side. The bedroom has windows that open out on the front and they're installing screens that open in. And a screen door here in the living room - only way to the outside unless I'm locked out and a bedroom window are unlocked.

There are very few mosquitoes around here because of the sea breeze, especially in the dry season - but there are some even now. And people get dengue. So for a year we've been shutting down at the start of dusk and turning on the air conditioning till morning. As soon as they put in the back screens yesterday afternoon, the place cooled off.

Bali traditionally had wide open homes made of wood and bamboo and thatch. It still has those but cement buildings with too few windows and poor circulation dominate. They're painting now final coat after installing - no drop cloths.

So far I'm keeping an eye on all details because there's so much shoddy work here. But there's good work too and so far these guys are good. I know them and their work because they've done a lot of work for the landlord around here. From Java - Jogjakarta. Are quiet - no chatting at all like Jesuits, like Zennies are supposed to. They eat squatting rice, veggies, some chicken or tempeh wrapped in paper. Drink only bottled water. I refill their water because we filter ours, don't buy it. They might boil theirs and just refill the bottle. They've probably got a couple more days.

It's going to cost about $150. Just asked the senior, Kadino, if he had a card. He told me get paper. I tried to hand him my little notepad but he said he didn't write - and this was only his name and phone number. He did recognize the numbers though. 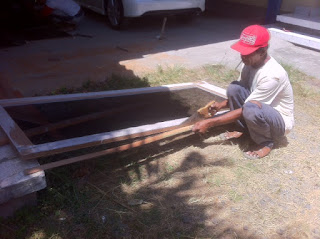