When Balinese Got Married 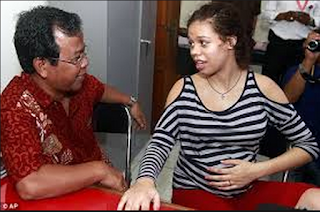 Talking to Bali Bill about how open the Buddhist priest's attitude toward marriage was. The priest said that a lot of men who get married have girlfriends at the time, even ones that come to the wedding and that the true test is in your heart, not in the ceremony or certificate. Bill said that in Bali they don't get married till the woman is pregnant. He said that the purpose of marriage here is to have children and if there aren't going to be any children then there's no need to get married and the family will urge the man to find another candidate or fiance - same word.


He said he'd been to many wedding ceremonies where the bride was five months or so pregnant and that there was no stigma attached to that. He also said that it didn't matter if it was a boy or a girl. I'm sure that others would have other to say but that's what Bill said. - dc
at June 13, 2015