We're not getting married at the Diamond Chapel pictured here though it's a short walk from where we are being betrothed.

Below is a photo of the inside of the Diamond Chaple and then, thanks to Google image search and all the nice people taking photos of everything on earth and posting them, various shots of the hallowed ground where we will plight our troth.
Here's the inside of the Diamond Chapel. Lot of weddings around here. Mic Jagger down the beach at a place that's 1500 bucks a night with a three night minimum. Frequently see newly weds standing on a jetty in full regalia for photo op with family and friends.

Now for photos of Sindhu Beach where our ceremony is to be on July 10th at 5pm.

Standing down near the water. 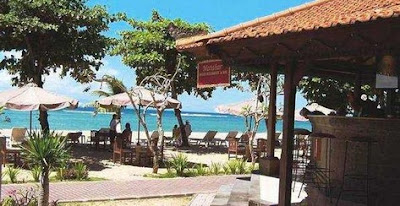 We go to a place like this, swim some,
then drink some coconut water. Katrinka might take a walk while I work on this website etc. 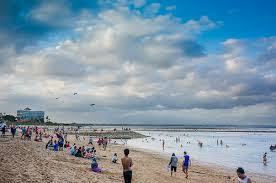 There are usually other folks on Sindhu Beach - White folks, Chinese, a few Japanese, lots Indonesians. That big building in the background is on the Bali Beach Hotel grounds. It's the only hotel like that - paid for by Japanese as part of war reparations. Balinese didn't like it and passed a law that no building could be built that was taller than a coconut tree. 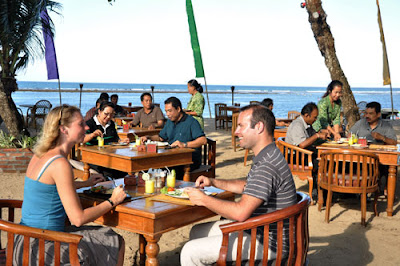 People eat on Sindu beach. Usually these tables would have big umbrellas over them for shade. Is there another word for that? 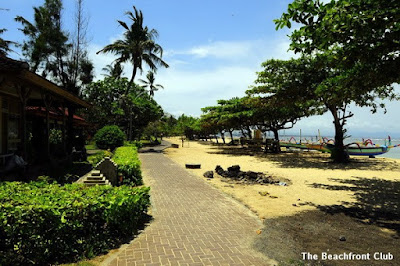 Thiat's the beginning of the grounds of the Inna Bali Beach Hotel - that big, unpopular building is just part of it and down further. Sindhu Beach is behind us at this point. That walkway goes the entire length of the beach - five kilometers - three miles. It's a really good thing to have. 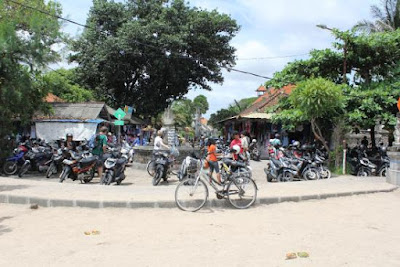 Now we're leaving the beach and walking toward Jalan Sindhu or Sindhu Street. 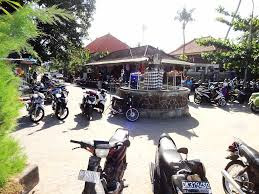 A closer look - that mini temple - lots of canang offerings on the other side - is wrapped in black and white (for good and evil etc) checkered material which means it's holy and to respect it. 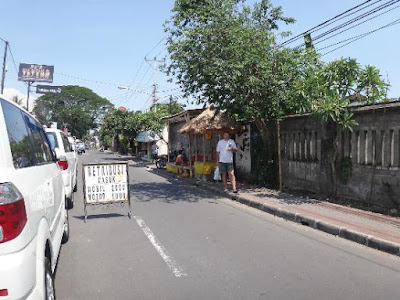 That's way down the only block of Jalan Sindu looking back toward the beach. That sign announces that cars pay 2000 rupia (15 cents) and motorbikes 1000 to go down there and park.