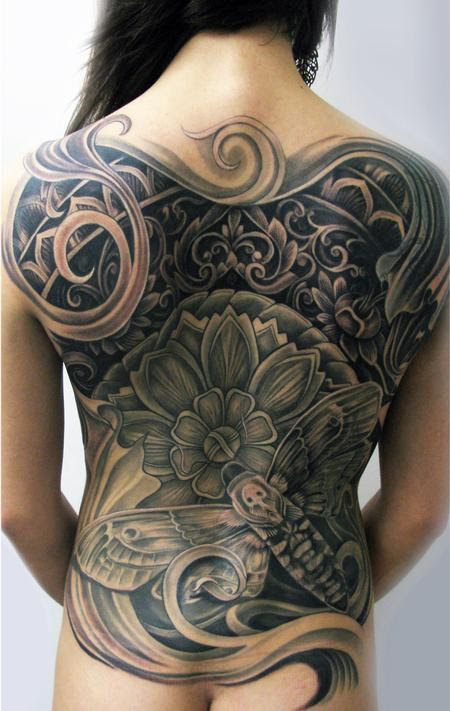 Met with Made (2nd born) of the Sindhu Banjar - Sindhu is the area next to where we live and banjar is the traditional local authority. Lives on a narrow side street. Walked through the little store in front to the courtyard of his villa now with a half dozen rooms with porches for tourists. He was rather imposing with tattoos covering his arms and chest. Sort of like the photo but in front, on the arms. Couldn't find an image on the web that was right so chose this one. Told him we wanted to get married on Sindhu Beach on July 10th. We thought he said that was no good, can't do it till July 25th - or, he pointed to June 23rd through 25th then August. At one point he suggested we check we the officiating Buddhist priest caues maybe they have other good days and bad days. Katrinka perked up and said, "He said the 10th would be a good day." Oh - no problem then. We'd almost left, thinking that we wouldn't be allowed on that day for whatever local Hindu Banjar reasons, but he was only talking in terms of propitious days and assumed that's how we'd choose the date.


Chinese Buddhists are way into good and bad days too of course, but not our guy cause he's in the Thai Theravadin no nonsense school. Not that Thais aren't into superstition - or us either. Just didn't have time for it cause we wanted that day. We're also getting an astrological reading on the date. Whatever signs suggest it isn't a good day we'll overcome with our own white magic. Then before we left, Made's wife looked at the Hindu calendar and said, oh the 10th is a good day. So there. - dc
at June 09, 2015