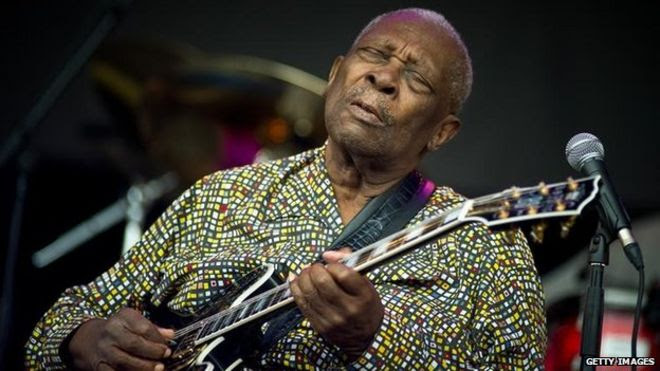 Whatever pop music was comin out, never had to worry too much if I liked it or not cause there was always jazz and the blues to listen to and always BB King. Till now. BB King has died at the age of 89 in Las Vegas. The BBC obit mentioned King was #3 on a list Rolling Stone list of greatest guitarists of all time. Here's a story about King from a recording engineer friend of mine - Ricky Sanchez who now operates Post Haste Media


Ricky Sanchez, a venerable recording engineer (Hot Tuna's regular) whom I had the honor of working with on [Warning: personal plug follows] some of my projects told me a BB King story that comes to mind today. I emailed him and he sent this:

BB King
Very saddened to hear of BB King’s passing. His playing was instantly recognizable from the first note. His vibrato. The way he could bend a note. His phrasing and of course his singing voice.

Besides being one of the most influential and well known blues players in history, he was a wonderfully humble and nice man with a great sense of humor. I saw him perform multiple times, but one of the highlights of my early days as an engineer was to record BB King and his band in the studio.

No, it was not one of his many great records, but a Budweiser beer commercial. At the time, Bud’s ad agency out of St. Louis was using various recording artists to do their take on the “This Bud’s for You” theme. I did the Tubes version and BB King’s version.

We had 6 hours booked. The King’s big purple bus pulled up, the band got out. All of the amps and drums had been rented per the band’s spec and were ready to go. They walked right into the studio, shook everyone’s hand and got to work. He was all business.

The young ad team (I think there were six of them) obviously did not know much about either the blues or BB King other than probably an intern telling them that he had a guitar he called Lucille. They had the band play the song with BB just singing the lyrics which they had written out. The lyrics were wall to wall for the entire minute.

Then the lead producer said “Now BB, get Lucille and play some blues”. I cringed.
Mr. King picked up his guitar, plugged into the Fender Twin and I pressed record.
The song played for a minute and he did not play a note. The producer looked confused. “BB…ok. I want to hear Lucille sing” King looked up, nodded, then I pressed record. A minute later…nothing. The producer looked concerned. “One more time”. Nothing. Again he said “BB, you’re not playing…we need to hear Lucille”.

Mr. King looked up, the band shook their heads and replied, “I’m singing. BB King does not sing and play at the same time”. The rather dense producer said, “yes, but we have your vocal on tape already. I need you to play now. We need to hear Lucille”.

I realized that BB King was hearing his vocal in his headphones. Since the lyric basically just repeated through the whole minute, I asked if I could try something. The producer said “whatever…I just need that guitar on there”.

The minute finished. BB King put down the guitar, smiled and said “That is the blues…now order us some lunch, you have what you need”.

We did. The King of the Blues had spoken.
***
I also remember Ricky saying years ago that when King listened to it he said he couldn't play the tune, "It's not blues. I play blues." The producer assumed he was being overly modest and told him he was the king of the guitar and could surely play that tune. Ricky said that King was right. He tried and couldn't do the tune so Ricky recorded him doing blues that went along with the song.  - dc
at May 15, 2015